DRIVING IN A GROUP 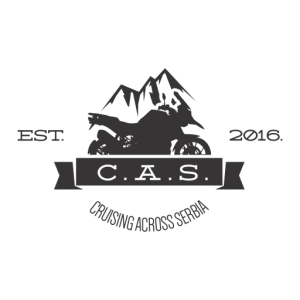 The truth is that motorcyclists love to ride in a group, often to small groups of friends but sometimes it is also a sizeable group at a motorcycle rally or similar event.

Being part of a group, then, is certainly very tempting ……….. 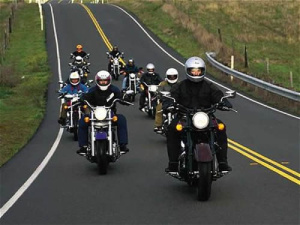 In order to drive a motorcycle in this way, there are basic rules that must be respected, It is imperative for reason of security.

First of all to come to the place designated as the place where the group will START for a ride ……… at the agreed time, the motorcycle in perfect condition, with a full tank ….

DRIVING IN COLUMN (zigzag arrangement of motorcycles )  left,  right, and so on ……

Drive in a way that motorcycles devices are essentially 2 column, the “guide” drive on the lane road,  on the left side, the first rider after him drive 1 (one) second later on the right side of the same lane, the third motorcycle moving 2 seconds after the first rider, 1 second of time between each motorcyclists ………………. so on as long as it has motorcyclists participants in the group.

When stopping groups (columns) for a red light, for example, all motorcycles are grouped into two columns. Everyone stays in “their” side of the lane or approaching the motorcycle in front of you at about 0.5m and so are waiting for a restart.

As soon as the group starts again, form a column so that any motorcyclists have in front of him a motorcycle around 2 seconds of time and left (or right, depending on which side of the lane on drives) a motorcycle at about 1 second of time.

When driving through curves, outside of the village ……………… column is formed in a column one by one because the safety of all riders need a full lane width.

As soon as the column (group) once again finds himself in the long direction, forming the column 1 left, 1 right ….. each with 1 second of time difference ………..

The “Guide” communicate with other participants of the group with a help of signs. It is necessary to understand the meaning of each sign to driving in complete safety and in order to be informed when driving. As soon as the guide show to the group any sign, the first driver behind it will repeat the same sign, and so on until the last driver (whom we call “the cleaner”).

This formation gives plenty of room to the safe driving and discourage other drivers (motorists) to “fall” into the column. The last driver called “cleaner” can drive, if desired, on the left, right or in the middle lane and must be very experienced driver. Its role is very important, he is a person who “control” the entire column from the back because of his field of vision and hi can react if necessary.

(except when a motorcycle in front of you gives an indication that stops it from known reason, you continue …..)

If a group at a traffic light, junction, stop sign …….. …. divided into two groups. The first in a part of the residual group,take temporarily the role of THE GUIDE OF THE GROUP. The first part of the group will drive slow until they are catch up with the second part of the group…………… and will continue driving as before.

Positioning less experienced drivers (beginners) will be positioned nearer to the GUIDE GROUP so the effect known as “elastic” will be low as possible.

Between each driver during the reaction to the frontal driver action,  there is a small period of time. Suppose that it is 1 second.

How these things non-stop happens………. if we show this as graphic display it will look like one elastic that you tightening and then you release him ………. so countless times.

At higher speeds, this effect can be very “inconvenient” for drivers “behind” …………. in case they are not experienced drivers and they not anticipate, so the “rubber band” to be less pronounced …… With the above in mind, the “Guide” of the group deploying all the motorists who make the group.

There is no shame to say that you’ve never ridden in a group, there is always a “first time”, so listen to the advice of experienced motorcyclists who will lead the group and will not be the problem.

If you have an urgent need to leave the group …………. do this on the side on which you are traveling, inform your nearest driver’s of your intention and he will pass it to the”Guide” to the next scheduled pause. The best way is to leave the group at the prescribed “pause point” when you can personally inform the “Guide” of abandonment of your travel (tours).

While driving, avoid sudden acceleration and sudden braking also how much you would not have influenced the formation of an undesirable effect “rubber band”.

When you travel with a group, the most dangerous action are overtaking. It’s happen during the  driving that is necessary to overtake a vehicle that is slow (cars, trucks …) and the “Guide”of the group will decide when is the best and safest moment to start overtaking ………… he would elapse vehicle and will not immediately reduce gas that would leave behind so that other motorcyclists overtaking performed in more secure conditions. A little later he will slow down and wait for ALL members of the group, and only then will continue to drive with the speed of the vehicle before overtaking.

If an unforeseen problem arises with your motorcycle that requires emergency stop ………… driver needs to show with signs that it will stop.

All the other drivers of the group will continue to drive …………… Except the “cleaner”, that will stop and provide assistance to the driver in problem. The “Cleaner” is a person who has the ability to inform the “Guide” by phone, or radio service (if any).

The guide will take the group to the first safe parking, where the group will stop and wait to see how to remove the reason for stopping.

Here are a few safety rules to be followed while driving in a group:

It is possible that bad driving conditions, the width of the road brought the “Guide” to make a decision to ride in single column ………………… then you have to be even more careful because the driver in front of you will be closer and “the risk” is higher. Ride in single file allows the cars to more easily overtake bikes in column then in a “zig-zag” formation, the “zig-zag”formation does not allow such a thing.

In the case that it is a large group and there is a need for “flyers”, then they must wear fluorescent vests to be visible to other road users, the flluo vests give to them an amount of seriousness, when you stop the traffic because the column have to passe, they are easier to accept by other participants (cars, trucks ……).

How ever is the number of bikers in the group, it is good to arrange a few basic signs to make the communication possible in the Group.

The following are basic signs 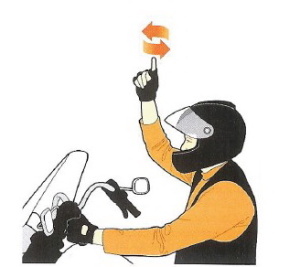 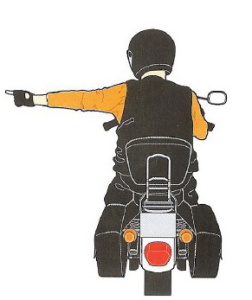 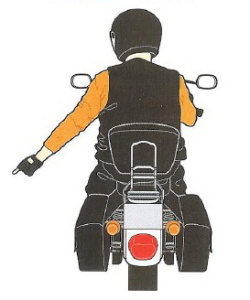 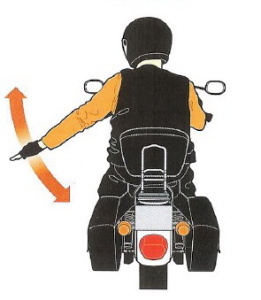 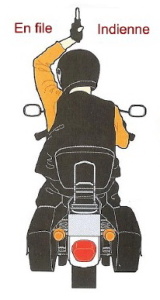 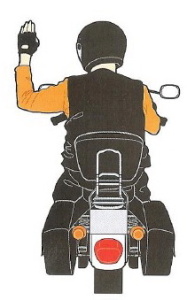 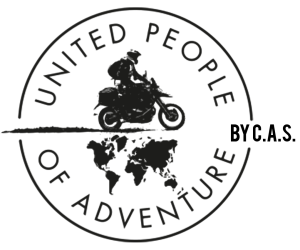